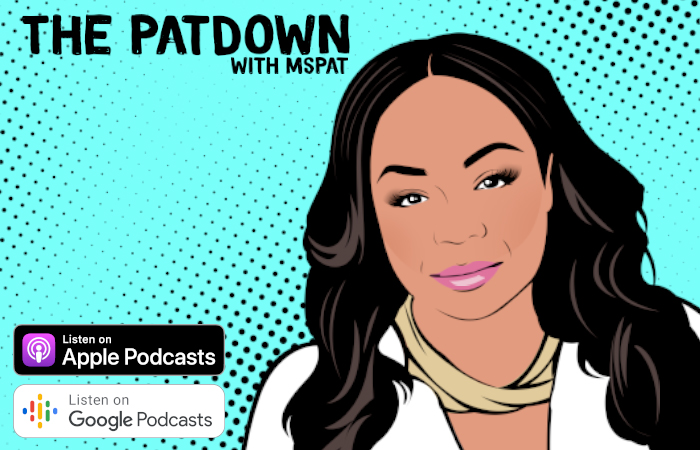 Where to Get the Podcast

Ms. Pat is a powerful comedian and author who brings an honest, in your face, and hilarious perspective to her shows. Born to a single mother of 5, living on welfare in a tough West end neighborhood of Atlanta, Ms. Pat learned early on she would have to fend for herself in this world. Her Grandfather ran a “bootleg” house where as a kid she learned how to roll the drunks for food money. She had her first child at 14 and her second child at 15. She became a drug dealer in her teens known by the street name “Rabbit.” At 19 years of age, with two toddlers and a new husband, she was handed 4 more young children from her sister who was struggling with drug addiction. With her husband’s help and encouragement, she finally decided to get out of the “life.”

While making regular visits to the welfare office for food stamps and Section 8 housing assistance, Ms. Pat was first told she had a talent for telling funny stories. In 2003 with her case-worker’s encouragement she decided to go on stage and appeared at her first Open-Mic. From the moment she stepped on stage she knew she had found her place.

She has appeared on NBC’s “Last Comic Standing,” Comedy Central’s “This Is Not Happening,” TV Guide Network’s “Standup in Stilettos,” and Nickelodeons “Mom’s Night Out.” She is a regular guest on the syndicated Bob and Tom Radio Show, and appeared on Katt Williams DVD “Kattpacalypse.” She has become a Podcast celebrity with appearances on WTF with Marc Maron, The Joe Rogan Experience, and the Bertcast with Bert Kreischer. Her autobiography Rabbit was published in 2017 by Dey Street Books, a division of Harper Collins.

Chris Spangle is a fifteen-year veteran of radio, politics, and media. He has been a podcaster for 15 years and hosts the Chris Spangle Show and a radio show in Indianapolis called Now Hear This. He works for a nationally syndicated morning radio show as a Digital Director.

At the age of 4, Deon Curry told his dad he wanted to be a brain surgeon… then he cut his finger and passed out from the site of his own blood. When he came to, his dad was in tears from laughing and it was at that moment he knew comedy was in his blood. He’s performed all over the country and made appearances on The Unhappy Hour Daily and My World Black and White with Sidney Smith podcasts.